Seattle Police have performed another questionable sting operation. This one is more filled with elements of entrapment and wrongful arrest than previous sting operations. Seattle police arrested 204 men, basically everyone who went to the Spa regardless of how they found the Spa and regardless of what was said. How did they arrest this many men? Lower the standard of police work, flood the internet with cheap sex and offer sex to those that didn't ask for it. Then arrest everyone to set foot in the door!

I have personally interviewed over 10 people that were arrested in this sting operation and I anticipate poor police work, problems in the police reports and a inability of police officers involved in the sting operation to have an independent recollection of individual incidents or the people they arrested. I anticipate police to be using a template as a police report and simply be plugging names into a template. All of these factors make good trial issues for a jury. After years of representing men charged with this type of crime I have never seen 204 people arrested in one sting. The only possible way for police to accomplish this is to lower the qualify of police work.

Consider the fact that this type of sting operation was used in the 80's and 90's to round up and arrest homosexuals. Then consider the fact that Seattle Police have used this operation to seize more than $20,000 in cash without warrants from men that have not yet been convicted of a crime. Prosecutors will then offer plea bargains that include a requirement that Seattle Police keep the cash! Seattle residents have had their taxpayer dollars spent to opening up a massage parlor, renting a yacht and a multitude of sting operations that report to reduce "human trafficking." Although there is no evidence of exploitation or human trafficking in these operations.

Posters on KIRO news facebook page don't seem to be very impressed with the operation. Of the 193 comments many seem to voice distaste for the operation, with opinions like:

-Yes I feel there are bigger fish to fry How about spending more time getting the drug dealers. Now that would be something wouldn't it!

-I think prostitution should be legal. As long as it's all legal adults who cares? No I am not a prostitute before u ask.

-This is stupid and absolutely UNPRODUCTIVE!! You will never stop prostitution and arresting Johns will only ruin a lot of relationships and lives!!! Why don't they spend that money, time and effort TO SOLVE VIOLENT CRIMES?!?!?

The Seattle Times facebook post made on July 14th at 3:22pm has the same type of comments:

-And yet I keep getting offered heroin and meth on 3rd and Pine when I walk by McDonald's. Nice priorities, Seattle.

-So if the guy came in and legitimately wanted a massage then what? He just laid there waiting for his back rub and then what?

-Cars stolen, homes broken into, people Mugged, shootings unsolved, property crimes not investigated if even logged, yet this is how Seattle police spend their resources! What idiocy.

Unfortunately, we don't seem to be seeing any real reporting on the outrage of Seattle's citizens. Just reporters that are reporting that this is a "sucsess."  I have attached the ad that Seattle Police posted on backpage.com 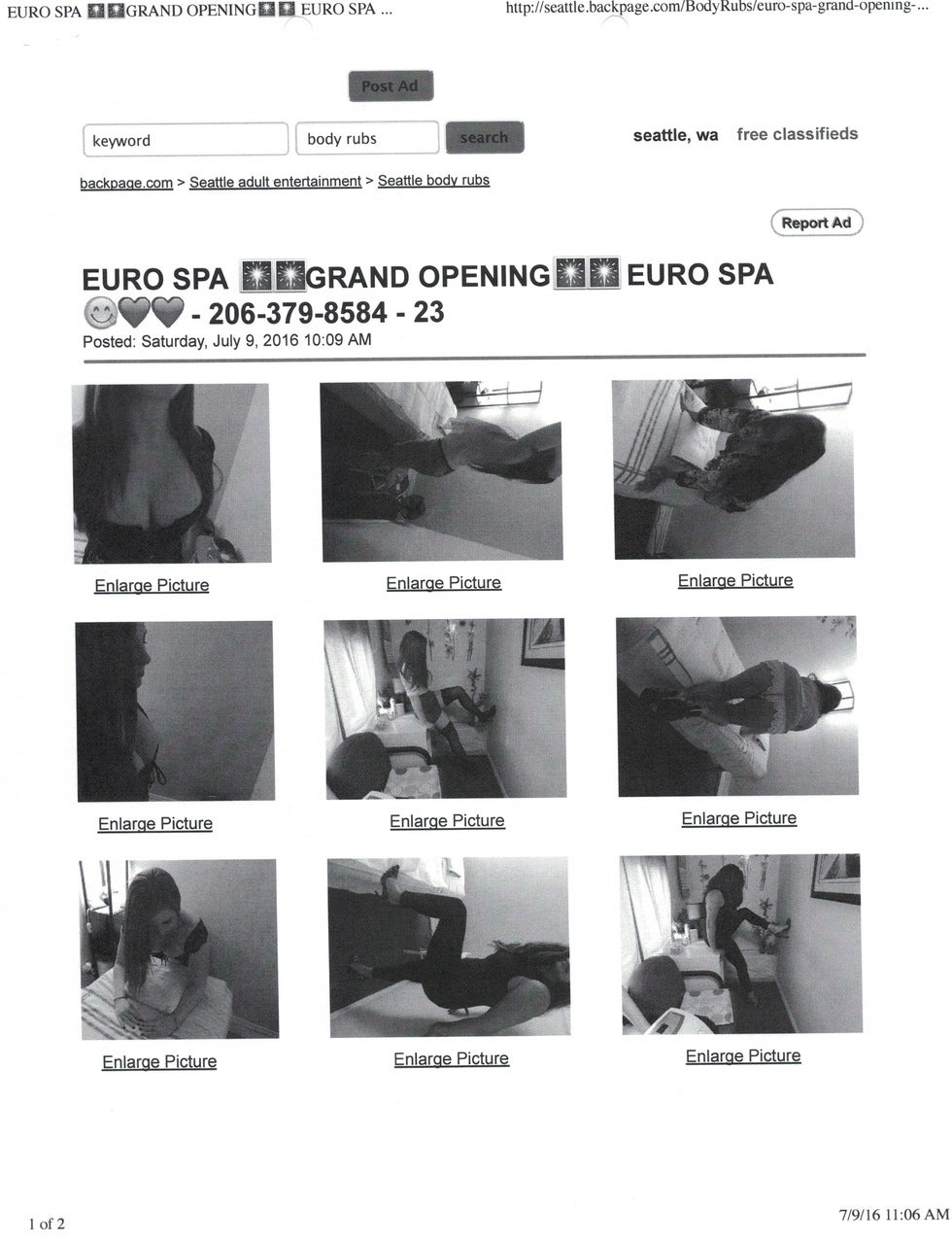 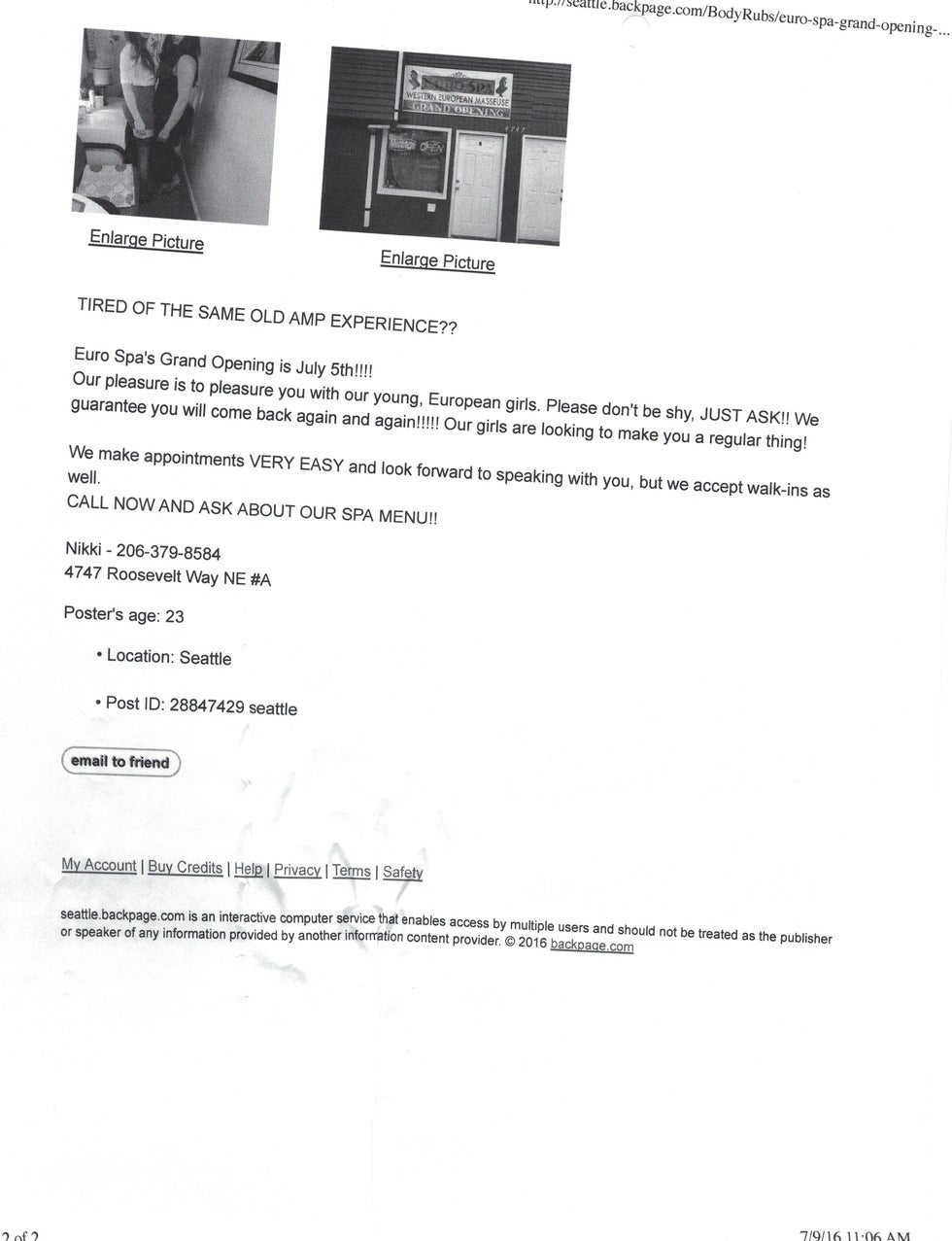 Sounds like entrapment to me. What a waste of tax payer dollars. Get out of the dark ages